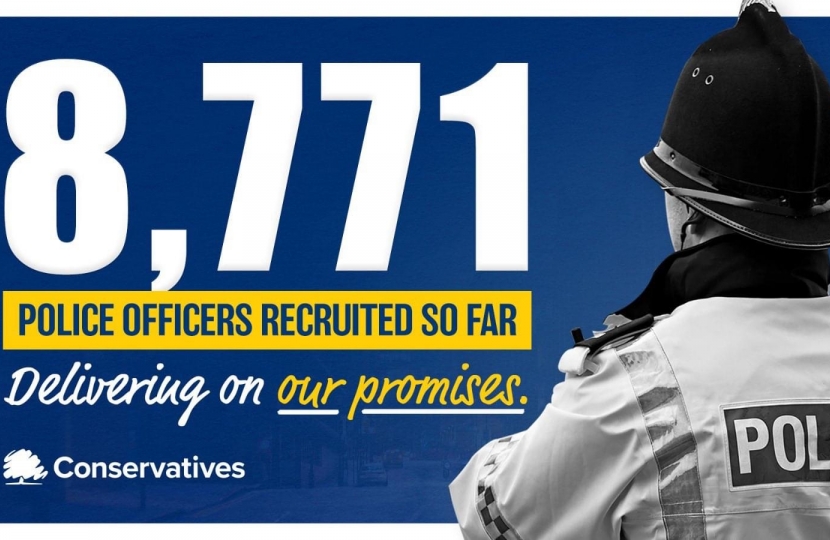 James Grundy has welcomed the announcement that 348 police officers have been recruited in Greater Manchester in the first year of Prime Minister Boris Johnson’s campaign to recruit 20,000 by March 2023, as part of the 8,771 additional officers that have been recruited across England and Wales.

This means the Conservative Government’s target of recruiting 6,000 by March 2021 in the first year of the programme has been dramatically exceeded, with the halfway milestone likely to be reached within the coming weeks.

The addition of these new officers brings the total number of police across Greater Manchester up to 7,135, meaning there are now more frontline officers on our streets to keep the public safe.

The pledge to recruit an additional 20,000 police officers was one of Boris Johnson’s key pledges during the Conservative Party leadership contest nearly two years ago.

The new figures have also confirmed that every single force across England and Wales has met or exceed their recruitment targets. 139,000 people have applied to join the police since the start of the recruitment programme.

Analysis of diversity data shows that there are now 10,218 officers from a Black Asian and Minority Ethnic background – the highest number on record.

In addition to recruiting 20,000 additional police officers, the Conservative Government is supporting the police with the powers they need to crack down on crime, including through introducing the landmark Police, Crime, Sentencing and Courts Bill – which will give the police additional powers to get knives off the streets, a £636 million funding boost for police forces this year, and a new police covenant – which will enhance support and protection for frontline police officers.

“Getting more police officers onto our streets is one of the people’s priorities, and so I am delighted that this Conservative Government has already delivered an extra 348 officers across Greater Manchester.

“Every one of these officers will make an enormous difference in helping to cut crime and keep people safe – and I know that many more will follow as this People’s Government continues to deliver on its promise to recruit 20,000 more over the next three years.

“By backing our police with the funding, powers and resources they need, we are keeping the public and our communities safe, so that people everywhere can live their lives free from the fear of crime.”

“When I became Prime Minister, I made a commitment that we would recruit more police officers, cut crime and make your streets safer.

“In just one year, we have hired an extra 9,000 police officers, smashing our first year target and putting us well on track to recruit the 20, 000 new officers we promised.

“But we need Police and Crime Commissioners locally who can continue to work with the Government to recruit police officers and cut crime as we Build Back Safer from the pandemic, so I’d urge people up and down the country to vote for their local Conservative candidate on Thursday 6th May.”

“As Home Secretary, keeping you, your family and our country safe is my number one priority.

“One of the Government’s key promises was to put an extra 20,000 police officers on our streets, and I am delighted that one year in we have surpassed expectations and already recruited nearly 9,000 additional police officers.

“Our police officers are the very best of us and I will continue to give them the resources and powers they need to keep us and our loved ones safe.  But I need local Police and Crime Commissioners to work with me to get crime down as we emerge from the pandemic so I would urge everyone to vote for their local Conservative candidate on Thursday 6th May.”

HAVE YOUR SAY ON COVID-19 VACCINE CERTIFICATION STATUS

The Government is currently trialling the use of COVID-19 vaccine certification across the UK, both for international travel and for use domestically in the UK, and James Grundy MP has launched a new survey to residents of the Leigh constituency so they can have their say on this important issue.