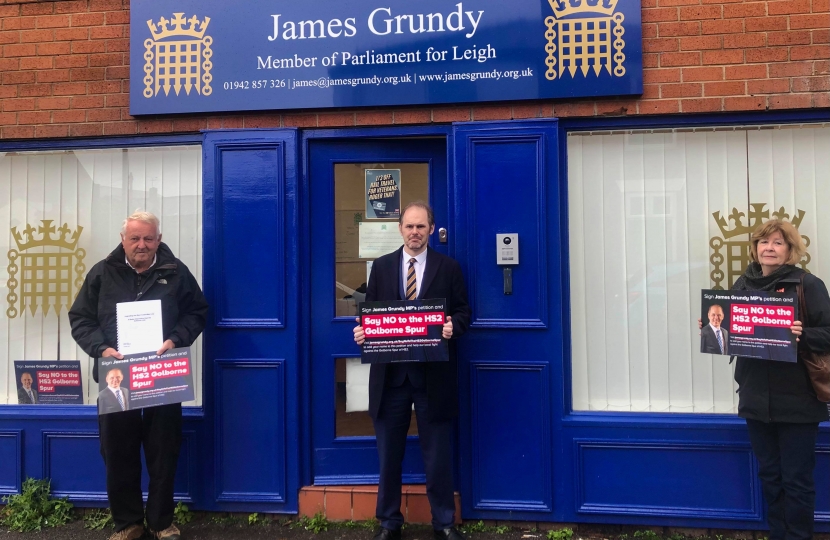 Today, Leigh MP James Grundy has launched his “Say NO to the HS2 Golborne Spur” petition, and is calling upon local people to join his fight against the controversial railway project.

During his time as a Councillor for the Lowton East ward, and now as Leigh’s Member of Parliament, Mr Grundy has been vocal about his objections to the Golborne Spur of HS2.

The Government has launched a new consultation on the remaining sections of HS2, including the Golborne Spur, and Mr Grundy is calling upon local people to sign his petition and demonstrate the local strength of feeling against this project.

Mr Grundy MP will include the results of the petition, including the number of signatures received, in his final consultation response to the Government.

“Since the Golborne Spur of HS2 was first proposed, local opposition to the project has been immense, with local community groups, businesses, and local residents coming together to fight against the controversial proposals.

“Thousands of families, including my own, are affected by the route of the Golborne Spur. Not only will it damage our local area by destroying precious green spaces, people's homes, and employment sites, it will also fail to provide us with any of the rewards, such as improved local rail connectivity in our area.

“This is why I have launched my “Say NO to the HS2 Golborne Spur” petition and calling for the help of Leigh residents, to continue to demonstrate to the Government our local opposition to this rail project.”

To sign the petition, please visit www.jamesgrundy.org.uk/SayNoToTheHS2GolborneSpur . The MP’s petition will close at Midnight on the evening of Sunday 6th December.

Mr Grundy’s petition also has the backing of local residents.

“HS2’s Golborne Spur is going to have a detrimental impact to the lives of local people. The proposed route will see our beautiful green spaces effectively destroyed, such as Byron Hall Wood, and will be a permanent scar on Lowton and Golborne.

“This is why I’ll be signing James Grundy MP’s petition against the Golborne Spur, as well as submitting my own response to the Government’s consultation.”

“The Golborne Spur of HS2 has no benefit for the local area, including the wider Wigan Borough. Local people want to see local rail connectivity improved to nearby towns and cities, rather than a rail project that will fail to reconnect our area to the local rail network.

“James Grundy MP has my full support in his fight against the Golborne Spur of HS2, and I hope that local residents will also sign his petition against this project.”

Mr Grundy is also encouraging people to respond to the Government’s consultation, as well as signing his petition, to ensure that local voices are heard throughout this consultation process.

Local residents can respond to the Government’s consultation by visiting https://www.gov.uk/government/consultations/hs2-phase-2b-western-leg-design-refinement-consultation.