LEIGH MP LAUNCHES A SERIES OF CRIME MEETINGS ACROSS CONSTITUENCY 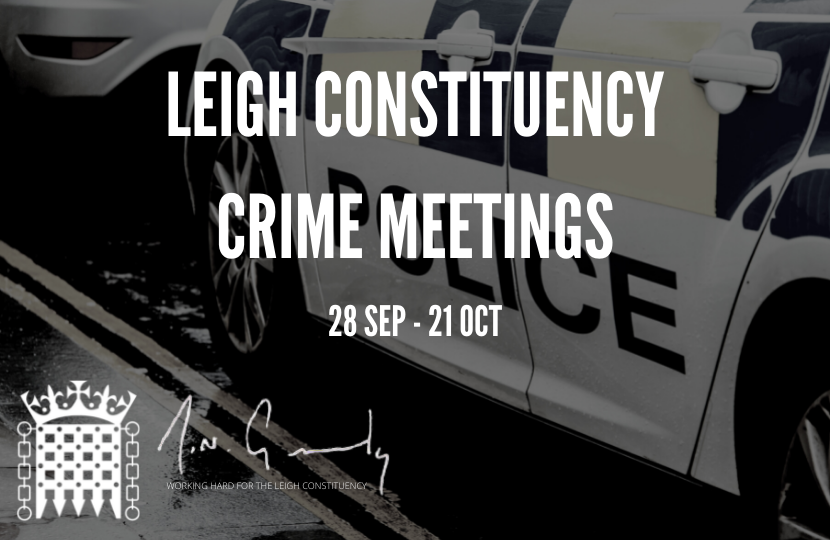 Since being elected as the Member of Parliament for Leigh, James Grundy has received significant levels of correspondence from constituents regarding concerns about or reports of crime in their area.

Some of the key issues raised with Mr Grundy by residents include concerns over long waiting times and a lack of response from instances reported to Greater Manchester Police (GMP); reported information not being actioned by GMP adequately; the lack of police visibility to deter criminal activity; the rising levels of anti-social behaviour that are discouraging residents from shopping on the high street, and off-road bikers causing noise and nuisance, among other concerns.

Given the rising level of crime-related correspondence he has received and the seriousness of the wide-spread criminal activity being reported, the Leigh MP has organised a series of public meetings across the Leigh constituency, each co-attended by a senior representative of GMP, to provide residents an opportunity to voice any concerns or reports they have directly. These meetings will highlight the exact issues faced across the constituency and will help with discussions on providing a direct and effective police response.

Speaking on these meetings, MP for Leigh, James Grundy said:

“I know that crime is an issue that many local residents have unfortunately had to experience and understandably have strong feelings on, with many raising their concerns about a perceived lack of adequate measures being taken by the authorities to directly tackle rising criminal activity.

“This is why I have organised a series of Crime Meetings across the various towns and communities in the Leigh constituency, to help find out more about the direct issues residents are facing and allow a platform for them to raise this with a senior police representative.

“Any resident from the Leigh constituency is welcome to attend these public meetings to voice their concerns on crime in their area. For those who wish to find out further details on where these meetings are being held or are unable to attend but would like me to raise their queries, please either email or telephone my office and a member of my team will be on hand to provide any information needed.”

Continuing to crack down on anti-social behaviour and criminal activity across the Leigh constituency remains vital. From the nuisance caused by groups of young people to serious drug, theft and violent crime, criminal behaviour affects everyone in our area.

James Grundy, MP for Leigh, has joined the campaign to commemorate the brave pilots and navigators of the Photographic Reconnaissance Units (PRU), who served during the Second World War.