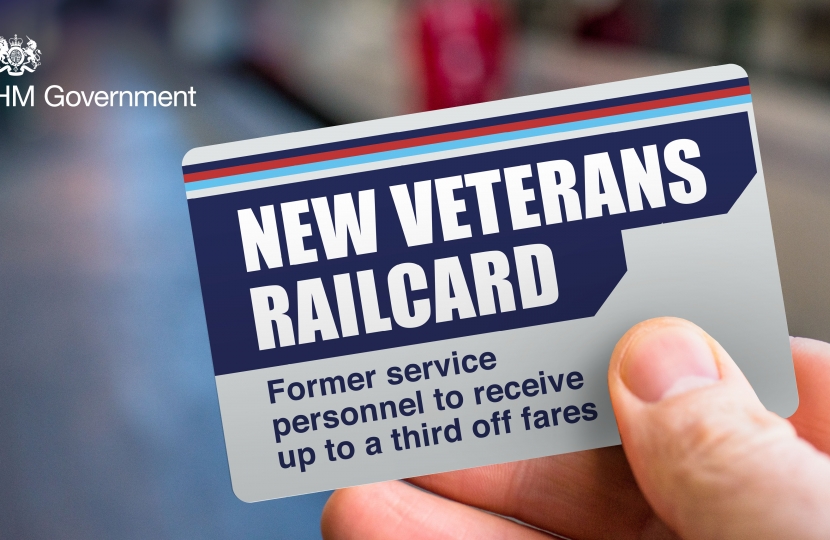 Military veterans across Leigh will soon benefit from cut-price rail travel, thanks to a new Government initiative.

Aimed at supporting veterans after their service, the card will provide up to a third off all peak and off-peak fares, as well as discounted travel for adult companions and children. It also forms part of the Government’s commitment to make the country the best place to be a veteran.

The card pays tribute to the Royal Navy, RAF and Army, using the colours featured on the veterans’ flag. An estimated 830,000 veterans, who are not eligible for existing railcards, will now be able to get up to a third off rail travel from 5 November 2020. It will be on sale at an introductory price of £21 until 31 March 2021.

“I am delighted that the Government has created a new railcard for our military veterans.

“A large number of veterans live in the Leigh constituency, and I am sure they will welcome this small but helpful recognition of the service they have given to our great country, especially those reliant on public transport due to injuries sustained in defense of our nation.”

“We have an eternal debt of honour to those who have served our country, and this railcard is part of marking our gratitude. For veterans looking to re-enter the world of work and connect with friends and family, it will cut the cost of travel to open up new opportunities.

“I am also delighted to present Sir Captain Tom Moore with the very first railcard. Through his service and his inspirational fundraising, he has shown the selflessness and indomitable spirit of all those who have served.”

Funded by the UK Government, the new Veterans’ Railcard will help open up opportunities for former service personnel, helping veterans with employment and retraining as well as strengthening links to friends and family.

“This is a wonderful occasion to accept the first veterans’ railcard.

“It is a rare opportunity to show thanks and gratitude to veterans and this rail card is a necessary recognition and investment in veterans, giving them the ability to re-connect and combat loneliness, something that we promote and support at The Captain Tom Foundation.”

James Grundy MP has welcomed the measures the Government has put in place to ensure every student across Leigh receives a high-quality remoted education while schools are closed.